Wellington is festooned with sculptures, memorials, murals, and ‘installations’. Responsible for quite a lot of this is the Wellington Sculpture Trust, whose mission is clearly to fill the streets with trip hazards. That said, having spent some time with this stuff (and gone through the effort of writing it up for my own webpages) I’ve come to be rather fond of most of it.

There are various ways to navigate the sculptures: this walk roughly follows the Sculpture Trust’s Wellington City Sculpture Walk, or what’s left of it (two sculptures have gone.) There may be other pages and other walks for the rest of the sculptures some day… there are actually about 100 to get through in total.

A dangerous lot of white lumps strewn casually around the Bus Station. 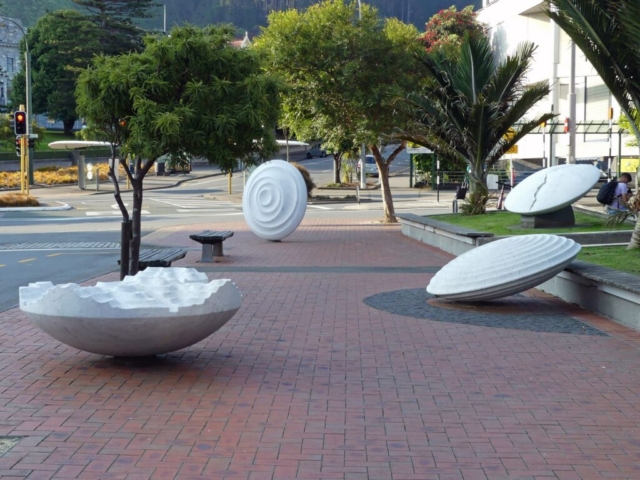 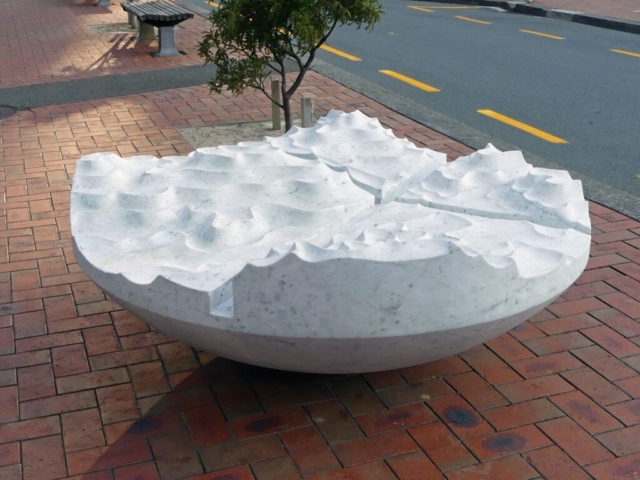 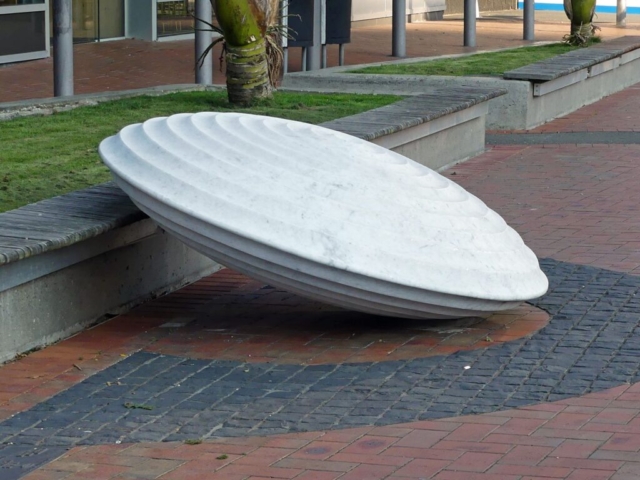 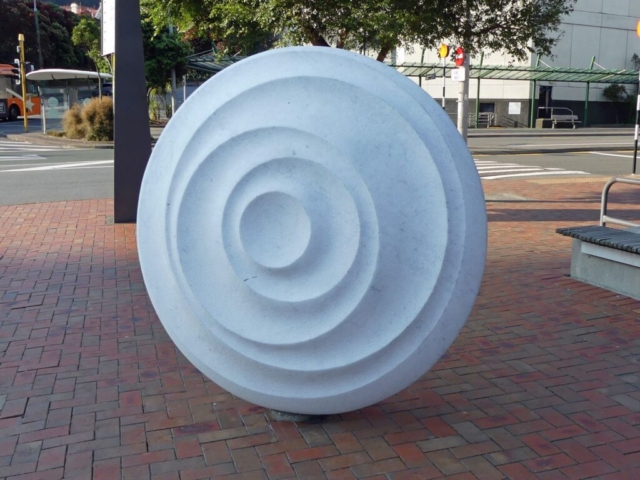 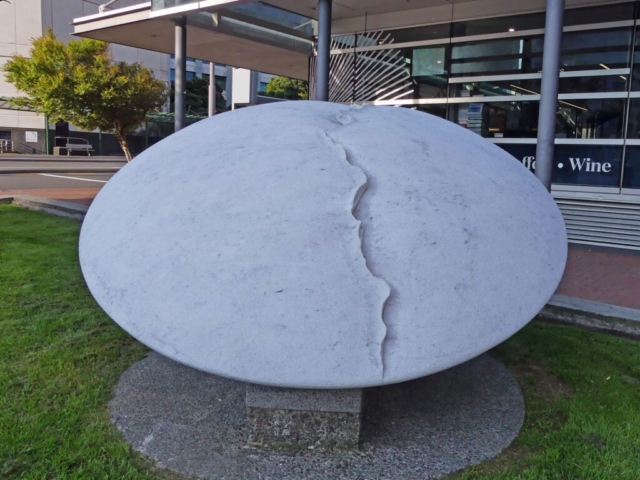 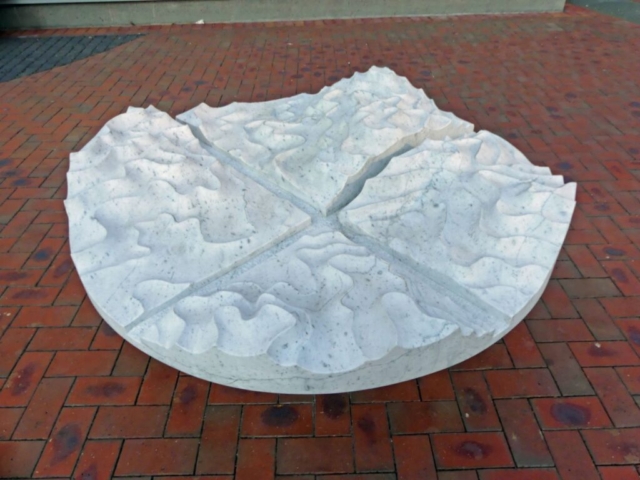 “The discs are strewn about the site to evoke a sense of randomness. Seismic is intended to be a sculpture that you pass through and perhaps contemplate the precarious nature of our environment along the way.” [It’s certainly precarious to your shins.]

A set of marker stones set into the pavement around the Wellington Cenotaph, to mark the line of the historic Kumototo Stream. Stand over the ‘drainhole’ and you can hear stream-like noises. 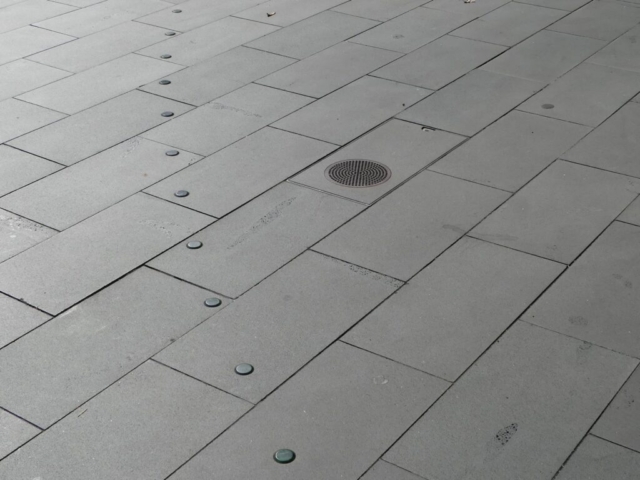 “The Cenotaph site has always felt like a transitional space to me, a space between…This sense of movement, change and reflection will be echoed in the work…The two parts working together but at different times of the day. During busier times the soundscape will slip into the background and the visual element will come into focus, the dotted line drawing people through the site. Then in the early morning, the evening, and at night, as the visual elements drop back the sounds will go to work, ghosting into the space during the quieter, more reflective moments of the day.” [I’ve walked over this many times and not noticed it.]

Use your imagination and these might conjure up an idea of Pacific Island statues. Sentinels. A bird’s head. Perhaps a boat or a banana. And a ‘standy-uppy-thing’ that might just be rather rude. 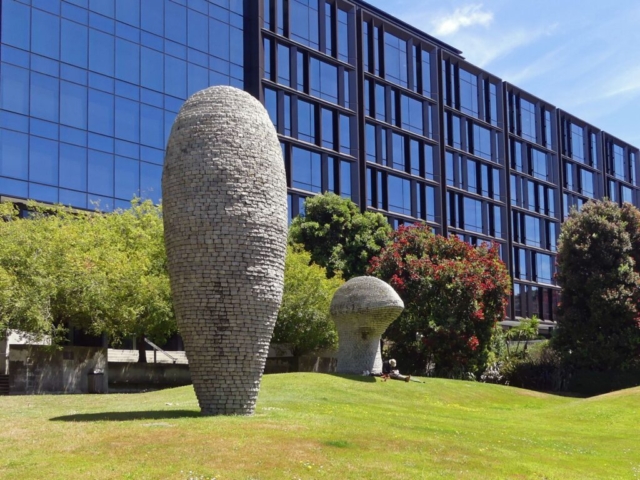 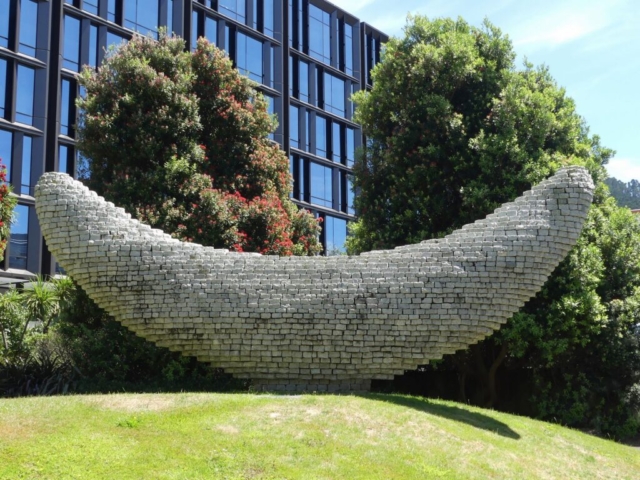 “The sculptures are based on the tools of navigation. Throughout Polynesia, the navigator is exalted as pathfinder, innovator and visionary – qualities necessary for discerning leadership.”

“The three shapes represent a manu (bird’s head), a waka (canoe) and a tuahu (an altar of stones). The bird guides the navigator, the waka symbolises a hopeful new beginning, and the tuahu, built on arrival in a new land, suggests promises and challenges.”

Adorned with traditional Maori emblems as well as the signs of the Zodiac you might think the idea is to conjure up some deep ideas about life falling out randomly, perhaps to a pattern, perhaps on an endless circle, perhaps under our own control or under some fate that makes it happen to us. But given that it also has references to Christianity and to government I suspect it’s meant to be more generic that that, with all the references being merely a recognition that all cultures chew over these questions.

Apparently there used to be an old vehicle turntable here, which partly explains why it’s allowed to block up this narrow alleyway. It’s a bit inconvenient, though, when the builders are in… 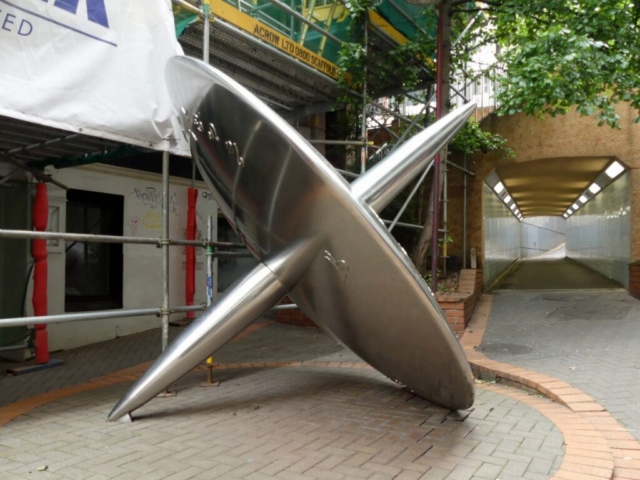 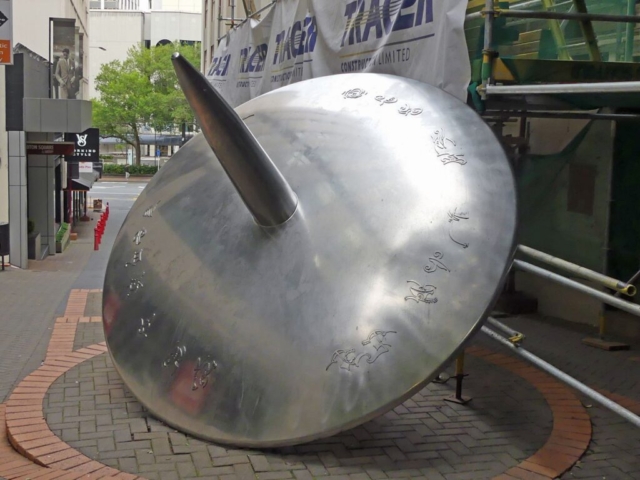 “The top is a European version of the potaka with Maori references in the hieroglyphics.  The symbols on the lower side are astrological, and on the upper side they trace the history of Whanganui-a-Tara (Wellington).” [I guess a potaka is a Maori spinning top or fortune teller – but I can’t find a reference anywhere.]

Not especially clever the way it blocks the street… particularly some of the low-lying parts. 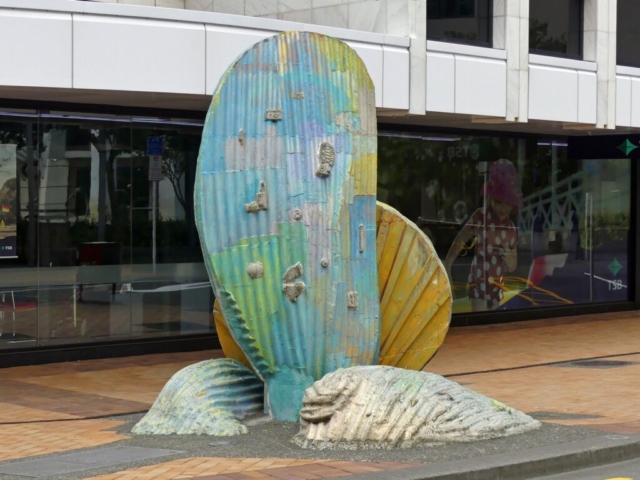 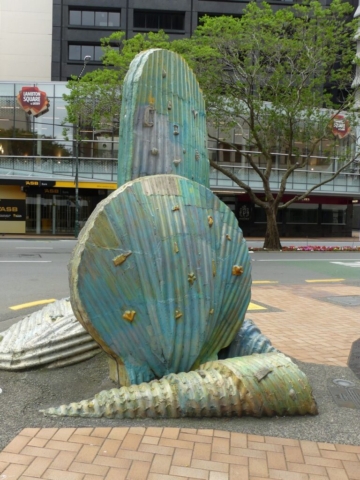 “The surfaces of the work are covered with numerous found objects, which suggest modern day fossils. A chicken leg, toys, hardware and other objects sit alongside objects found near the site.” [I think I’d have been happy with just the shells]

The woman is of course Katherine Mansfield, Wellington’s famous daughter. At night it’s lit from inside, which makes the particular point that her words are the message. 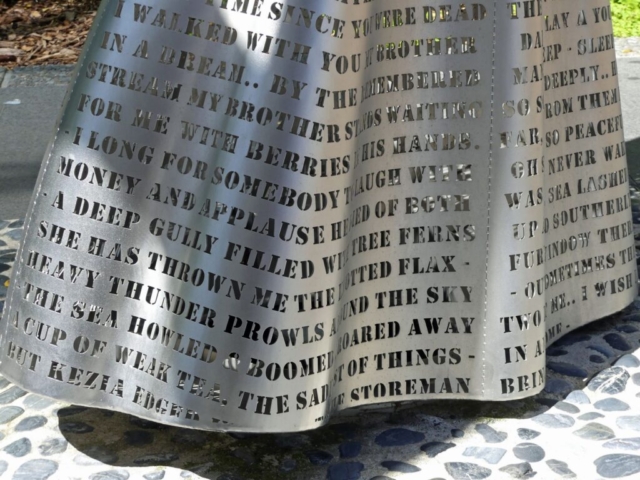 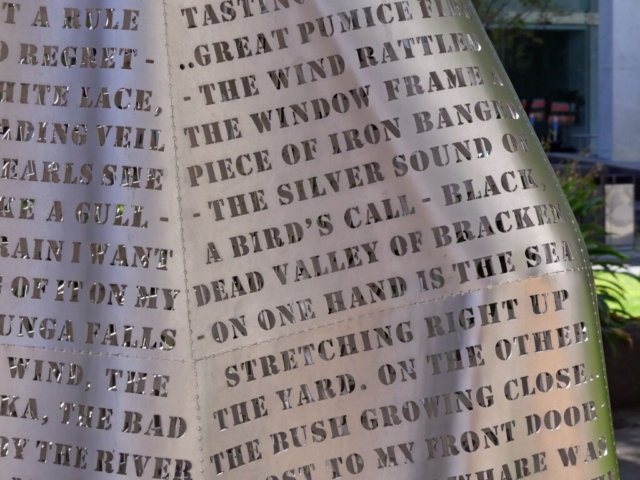 “Katherine Mansfield’s ambition was to be seen first as a writer and then as a woman. With this in mind, the work is designed to capture the essence of Katherine Mansfield while celebrating her literary heritage.”

The blobs are Braille – and if you can read them it’s part of a poetic piece about the difficulties blind people have trying to understand the world around them. Which is all very well, but I suspect most sighted people don’t get that far in understanding the sculpture. Maybe that’s the point, but I wonder if it’s being a bit too clever for its own good. 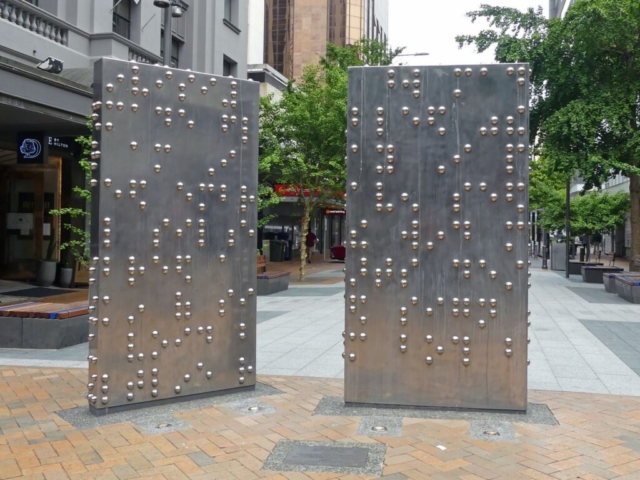 “Invisible City is about how we see, how we acquire information and how some things in life are hidden – the sculpture has a defiant muteness.” [I’m not sure I like ‘defiant muteness’ in a sculpture – I think it ought to help us understand it. But it’s likable nonetheless]

These days the centre pillar doesn’t work, but overall the effect isn’t changed – it just means you have to be a bit creative with the photography. I think I like this one precisely because it doesn’t pretend to be anything other than some light tubes on poles. Or perhaps – oh dear – it does, when I read the artist’s words below. 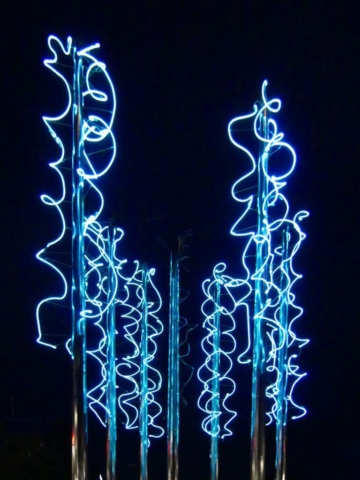 “The writing hand moves vertically up and down in space always changing to the moving viewer. SkyBlues is light energy; the verticals and drawn line move, shimmer, swirl blue in the cityscape.” [It hadn’t occurred to me that it might be writing. Perhaps he should have laid it out on its side.]

One of the more likable sculptures, though rather easy to walk past. The green blobs move round and round in the wind. 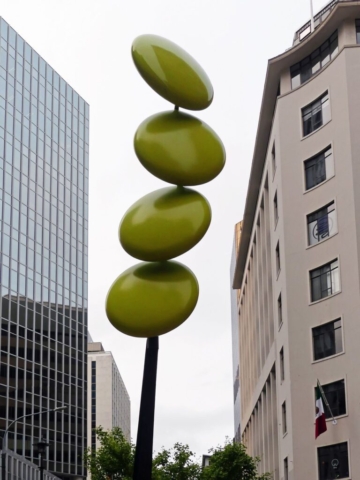 “The work looks at the study of matter, protoplasm being the inside active part of any living cell. The pebbles and movement simulate the random active cells.”

Sadly this one isn’t there any more, but there used to be a Skyball hanging above the Civic Square. As you might have thought was fairly predictable in Wellington, the wind got the better of it. 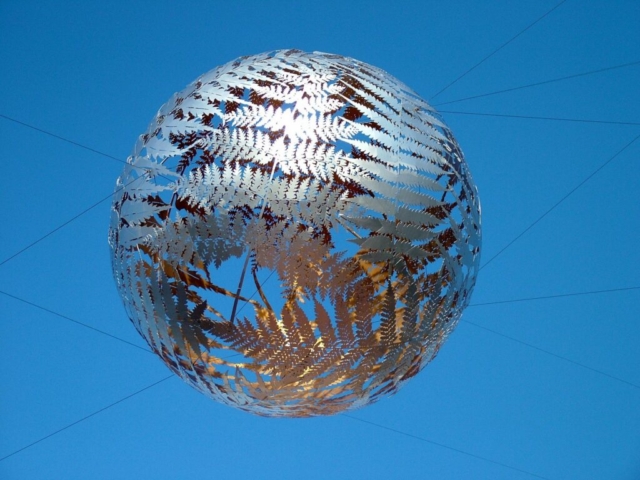 “Ian Athfield’s nikau palms are major markers of the Square, and with Ferns I’ve aimed for a sort of delicate intricacy that can float over the top of the palms so the two elements can work with each other.”

At first I thought this was a bit trashy, but it makes its point and it celebrates something basically good. “The gold nugget references the gold rush that brought businessman and philanthropist Thomas Macarthy to New Zealand; the column is typical of the classical modern architectural features used in/on buildings around the early 1900s. The candles are celebratory but also speak to the way the Macarthy Trust has been a beacon of hope for countless numbers since its inception, providing $61.4 million to charitable causes throughout the Greater Wellington region.”

Recalling some of the houses destroyed when the urban motorway bashed through Wellington, this is a rather interesting presence just beside the new road. 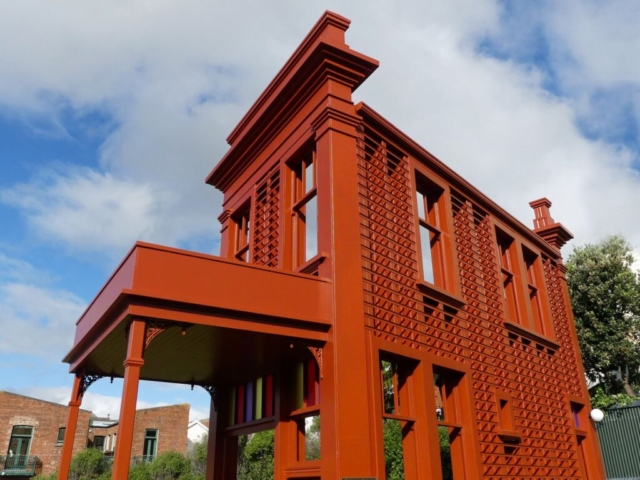 “It looks like a slice of a building left behind by the developers…tenuously existing on the edge of the new motorway. It mimics the buildings that are or were around it, to integrate it within the historical and contemporary context of the area.” 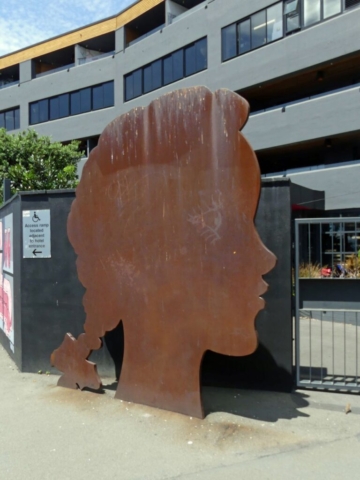 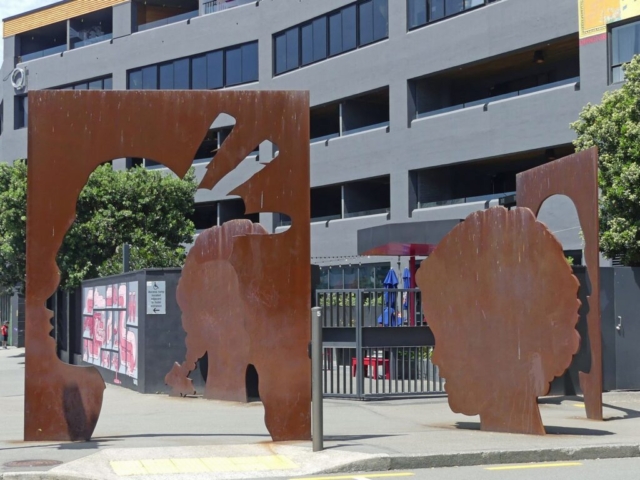 “The specific history of these people is not the point of the work. The portraits signify the diversity in family histories throughout New Zealand and foremost to this is the notion that personal history is paramount in the formation of a national one.” [It’s also more junk in the street to walk into.]

It’s supposed to be an albatross, but that sounds suspiciously like an idea she had one day after she’d already made it. I suspect she’d have done better to think ‘whale’. Or perhaps ‘stapler and glue gun’. 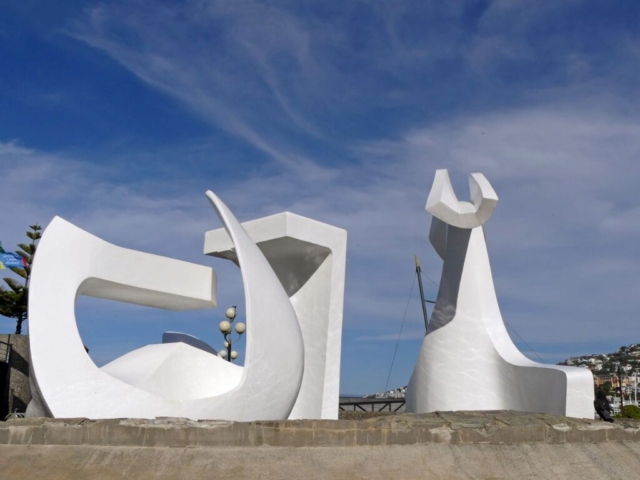 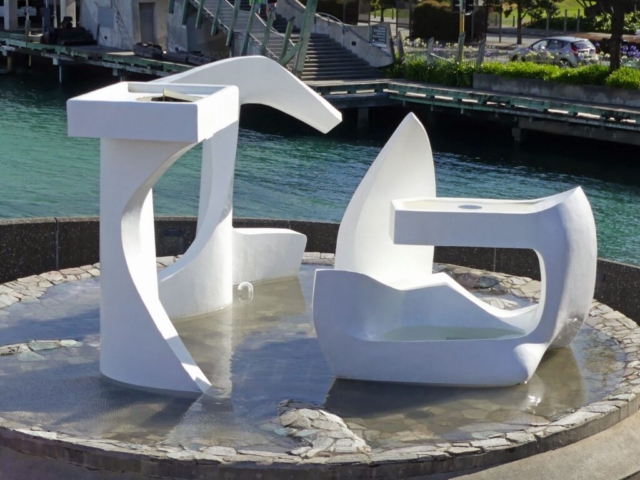 “The work is very tactile and abstract, although as it was being built I realised there was a real albatross there.” [No there isn’t.]

“I have always been fascinated by the albatross, its size, its power and its awesome grace.” [It’s actually more like a couple of whales, if anything at all.]

“My sculpture is large and white and of the sea.” [No it isn’t. It’s of white concrete.]

It’s based on Kina shell forms – which look rather like sea urchins – and apparently it was wonderful when lit up at night. (I don’t think it is any more.) 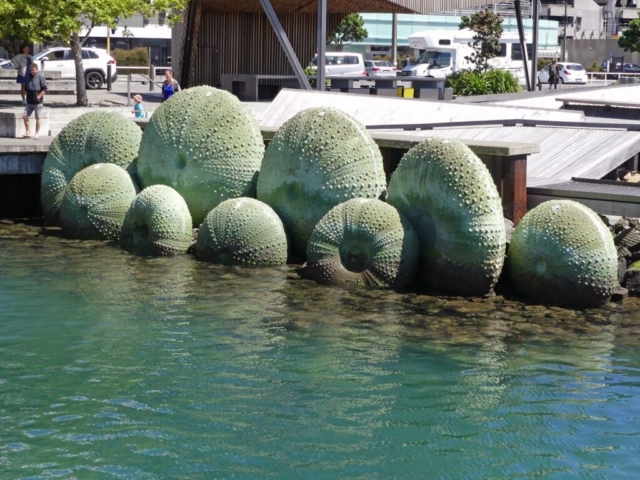 “Nga Kina acknowledges the history and physical geography of the area including the Kumutoto stream which flowed from Woodward Street to the sea and the location of the Kumutoto Pa. The use of the Kina shell forms can also be interpreted as a reference to a midden, a shell mound that may have existed on the Pa. Nga Kina provides a strong and conscious link to the Mana Whenua of Wellington.”

This ends the formal City Sculpture walk but there are a few more ‘forms’ littered around for the unwary to bump into. I might put them here – or on another page – in due course.