This is the usual driving tour including links to pages for the bigger attractions, and a narrative here for the smaller ones. The tour connects from Murchison in Touring Tasman then runs from Westport down through Westport, Greymouth and Hokitika to Haast. From there it connects to Wanaka in Touring Otago.

The West Coast is an entire region of New Zealand, but even so it only has a population of about 8000. It occupies much of the west of the South Island between the Southern Alps and the sea, but that’s the problem – it’s very long and thin, hard to get to, and it rains a lot of the time. And while a ‘rural retreat’ may seem idyllic, most of this region is beyond ‘retreat’ and is just ‘remote’. And very, very wet.

It’s the same in Fiordland (Doubtful Sound, Milford Sound, etc) but Fiordland is even more remote and has no population at all; the slightly odd thing here is the pretence that this is a great place to live when in fact it isn’t.

That said – when the sun comes out, it’s truly superb.

Westport is a sizable little town but, in 2000 at least, it hadn’t a single fast food outlet, no decent cafes, and (worst of all) no ATM cash machine! (It seems to be better nowadays.) On the other hand it has more pubs per head of population than any other town in New Zealand (a remnant of its gold rush days) and it also has municipal buildings in Art Deco style.

The pubs all look rather dismal, so here instead are Westport’s rather attractive municipal offices. They’re unbelievably grand considering they’re in West Coast region.

A bruising encounter with a mad woman in the Westport bakery got me a toasted sandwich for breakfast, and then it was off to Cape Foulwind. I wouldn’t say the wind was foul, but it was certainly strong, and the sea had a rare old temper on it.

The main attraction at Cape Foulwind is a seal colony. This picture looks down on the rocks where the seals are sitting. I was struck by how much like slugs the seals looked, though in this picture that hardly matters since it’s very hard to see them at all. Unfortunately they match the rocks exactly, which is good camouflage but makes it very difficult to spot them in this photograph. Believe it or not there are at least 51 seals in the picture!

The main attaction here is the Pancake Rocks, but just to show this is a lovely place in spite of the weather, here are two photographs of the coastal scenery:

There’s nothing at all to say about Camerons as an entry-point to Greymouth, but it does have a puzzling entry on the map saying Road-Rail bridge. It tuns out to be less exotic than you might think, though interesting if you’re in the wrong place at the wrong time.

I’ve never found anything interesting to say about Greymouth, and the weather’s always been horrible when I’ve passed through. Reportedly it’s the centre of a horrible sandfly population, but I’ve never even seen them!

Driving down this stretch of road felt very like driving down California’s Route 1 between San Francisco and Los Angeles. The roads are very similar (though in California there’s more sun) and both roads have only really been built in the last 50 years. Even the plants are similar, and the ground has the same crumbly volcanic look. I wonder why it’s the western sides of the US, Europe and New Zealand that have the best scenery. I can understand why they get the worst weather (basically because it all goes from west to east) but that doesn’t explain why the scenery is so good.

Here are two photos showing just how awful the weather can be, and then a view of the coastline as the rain lifts momentarily. The last photo is an attempt to photograph Fox Glacier – but sadly this is a much-diminished thing compared with what it was 20 years ago. The vegetation is certainly stronger, but the glacier has retreated far up into the valley – whereas you used to be able to walk right up and touch it.  Climate change is right here. 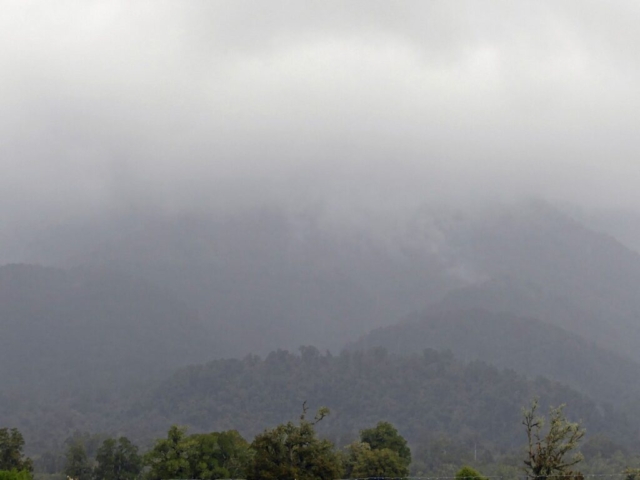 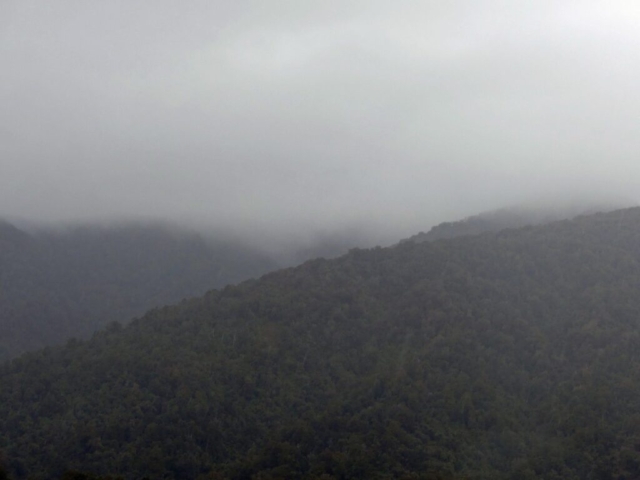 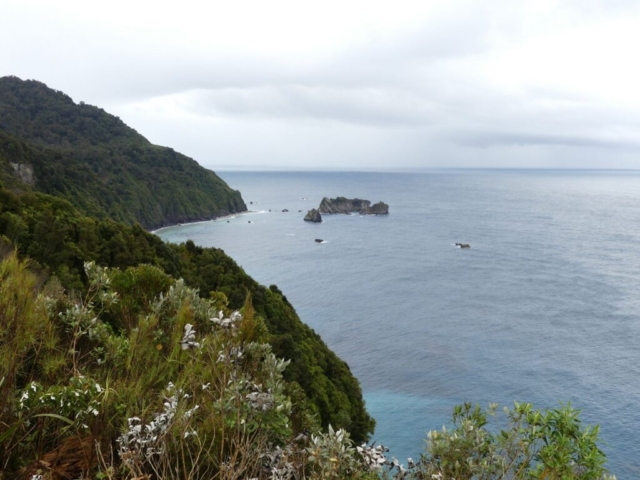 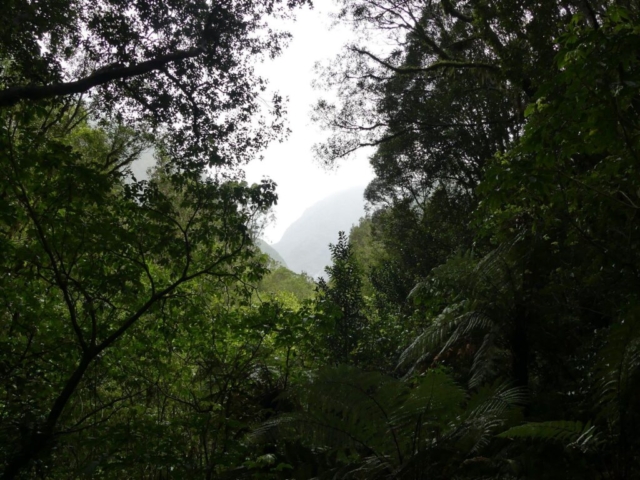 Down from Hokitika to Haast there’s a hideously long drive down the coast and two only settlements of any significance, at the glaciers Franz Josef and Fox. Both have extensive bars which offer alcohol and fry-ups, and helicopter companys which offer flights over the glaciers. In bad weather the only option is the bars, or to keep on driving…

Everything stops at Haast. There’s almost nothing there, but that’s the point. And there are always rainbows, because it’s always raining!

The tour connects to Wanaka in Touring Otago.