This is the usual driving tour including links to pages for the bigger attractions, and a narrative here for the smaller ones. It all looks a bit complicated on the map, but that’s because there are four connections to surrounding regions and they allow options for combining with tours there – or not. The tour here starts from Dunedin and runs down to Balclutha, meeting the end of Touring Southland. It then runs up to Queensland, where Touring Southland starts. (The implication here is that if you were pushed for time you could miss out Southland. That wouldn’t be a huge loss, though you might want to do the Doubtful or Milford Sound tours from Queenstown. On the other hand if you wanted to miss out the Cromwell road that wouldn’t be a great loss either, though the scenery is good.)

After Queenstown it heads up to Wanaka, to meet the end of Touring West Coast, then it heads down to Oamaru and Moeraki. Retracing the route northward then lead to Christchurch and beyond, in Touring Canterbury. Again, you could miss out the road to Oamaru and head into Canterbury at Omarama: but it would be a shame to miss Moeraki and Oamaru.

Lastly – depending how you put the pieces together there might be a case for doing this tour the opposite way. But I’ll assume anyone who’s read this far is probably well capable of working it all out.

Dunedin is a great city, very pleasant in some parts, with some real attractions. I say this because I’d visit Dunedin again any time… whereas Invercargill is a place I definitely won’t be going back to.

Dunedin is a great city, with attractions and buildings worth a look. I should mention First Presbyterian Church since it has bells that I definitely want to ring sometime.

Other great buildings are the Law Courts (very like the Railway Station) and the Municipal Offices.

Then there’s the Anglican Cathedral, a wonderful vaulted stone building. It’s one of only two truly vaulted stone churches in New Zealand (the other is St Matthew’s in Auckland) and you have to wonder what would happen if there was a serious earthquake like there was in Christchurch – but for the moment it stands there looking gorgeous.

Olveston is the other big ‘old house’ attraction in Dunedin alongside Larnoch Castle – but by contrast it’s a luxurious late-Victorian house rather than a slightly loony attempt at a castle. Here’s a photograph of the outside… for the inside, have a look at the Olveston website.

There isn’t much at Balclutha, but the countryside is pleasant. And at Balclutha itself there’s a powerful-looking bridge. The river was named by the early Scottish Settlers in memory of the river Clyde at home – Clutha being the Gaelic form of its name. The bridge is a little dull, but it’s solid enough, and it needs to be: this river regularly floods and sweeps away everything in its path. 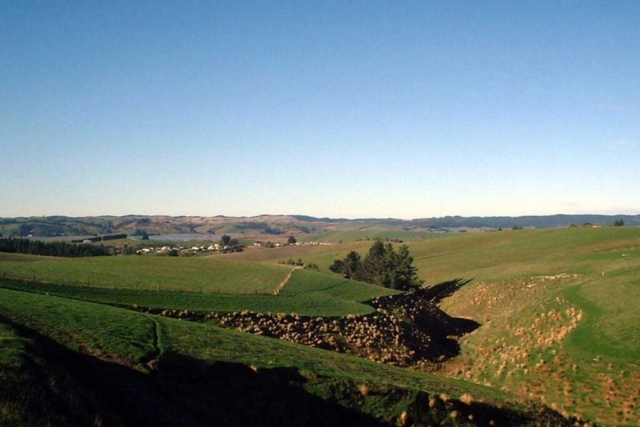 There’s an ongoing debate as to whether the hydro-electric schemes further up the river have made the floods worse – but either way it managed to cause millions of dollars of damage in 1999. The Clutha River empties a huge volume of water per acre of catchment area. This statistic is rather convoluted but it allows Kiwis to claim yet another world record for New Zealand!

Near Balclutha is a little old cottage called Sod Cottage, and tourists are encouraged to stop there. It’s fitted out with some old furniture but is otherwise rather dark and gloomy.It’s not clear why it’s called Sod Cottage: thoughts that it might be to do with a grass roof or soil walls seem to be incorrect. Maybe it’s just because tourists take one look and say ‘sod this’!

There’s nothing to say about Alexandra, but it makes a pleasant stop for coffee.

Similarly there’s nothing to say about Clyde – though you can at least get a great photo of the dam and the hydroelectricity scheme on the Clutha River.

Once you get to Cromwell, there’s a famous entry-sign to the town.

There’s also reputed to be a lovely historic district, but I haven’t stopped there yet.

Arrowtown is a pleasant little place with historic stores, post office etc – but the weather was so bad when I visited that I didn’t take any photographs. The most memorable thing in fact was a huge ‘big boy in a bun’ – basically a hot dog – served up by the local Rotary Club. It was just the right thing at the right time.

If Queenstown is tacky, Wanaka is definitely a step up; a pleasant town for the more discerning (i.e. older and less frantic) tourist, with lots of restaurants and wine bars and of course the gorgeous Lake Wanaka. And the fantastic Puzzling World!

The tour goes back through Oamaru and connects to Touring Canterbury (unless the plan is somehow to connect it to Touring Southland.)