Battles are fought over the meaning of the word Brutalism. Strictly, it derives from the French Brut, meaning raw, used in the sense of liquid concrete poured into wooden forms in situ and then revealed without any coating, cladding, paint or colouring. Raw concrete is celebrated as a pure expression of material and shape, without the falsehoods or finicky details of Victorian, Edwardian, or (God forbid) Art Deco buildings that make them seem cheerful and welcoming to us proles.

This may work in the baking heat and dryness of the south of France or the American desert. But in rainy grey Britain, raw concrete doesn’t fare well – particularly when councils screw the cost and the quality down. In New Zealand the climate is slightly kinder, but as an architectural style it still seems to create an ugliness that takes the breath away.

Aside from the purists’ definition, there are people who use the word Brutalist to describe any building they don’t like, or that they think looks ‘a bit brutal’. Others use the term to describe any building that’s got concrete in it, even if the concrete was obviously formed a hundred miles away and was just bolted together when it arrived on site. Neither of these is true Brutalism, but for brevity’s sake we’ll collect everything together on this page as the repository of a whole pile of stuff that makes you stop and think ‘good grief, how could they… in New Zealand?’

Wellington Cathedral doesn’t have quite the ugliness of true brutalism, but it obviously qualifies. It happens to have had a few twiddly window and door frames put in to work around, and to have had a weird salmon-pink dye added to make it look more friendly. But those horizontal lines in the concrete are a clear sign it was poured on site into wooden forms, in the manner of true Brutalism.

The Pukehinau Flats are another example of poured concrete, this time coloured in various violent blues (I suspect the blue is painted on, rather than being a dye in the concrete.) Famous for various things including the little house on the roof and the ludicrous round windows which make it look like a launderette, they were of course thrown up as ‘housing for workers’. If they were ever nice to live in those days have gone – they’re known now as bit of a desperate place where someone famously got murdered. (Remember the round windows… they come up again later.) 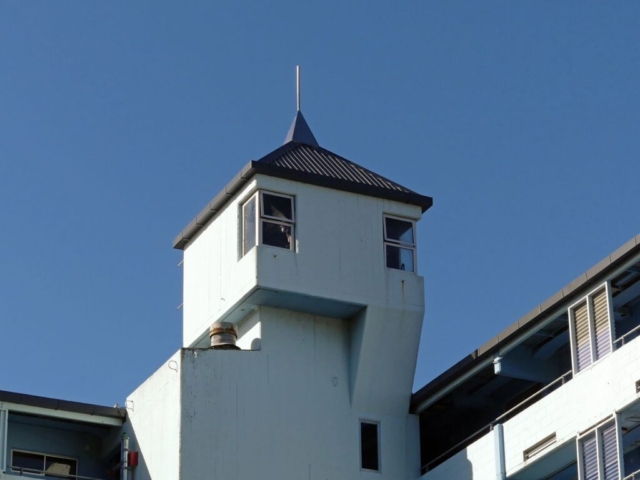 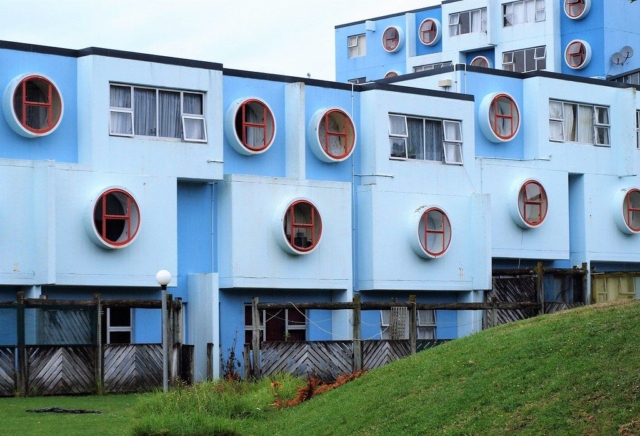 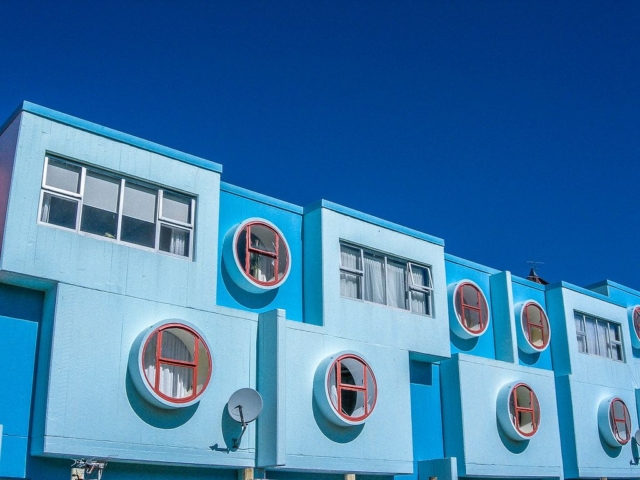 The top part of National Library isn’t really brutalist, though it’s made up of some pretty brutal concrete blocks that had to be made somewhere and bolted together when they arrived on site. But the bottom definitely qualifies: not only is it cast in situ, it’s styled with those uniquely horrible bashed-up concrete fins that indicate rustication – a deliberately rough look for the ground base of a building. What this actually means is that some poor soul had to roughen these up with a pneumatic drill – with all the noise, dust and effort that that would involve. 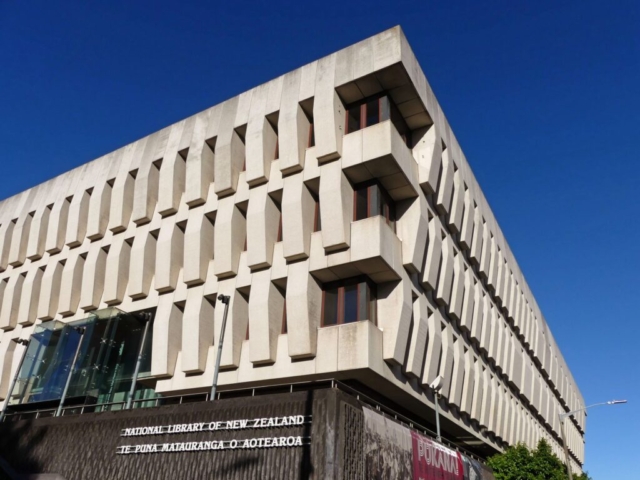 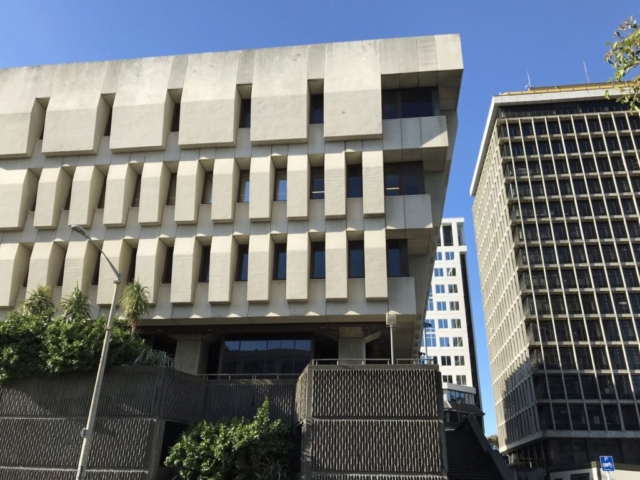 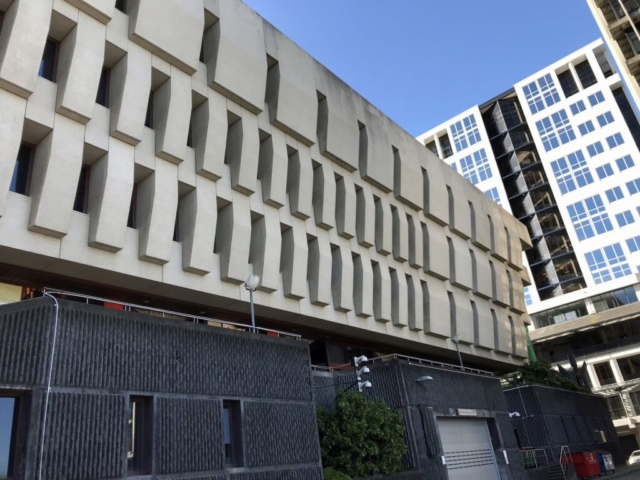 This may be the ‘most’ brutalist of the buildings here, though it’s actually a bit mixed. There’s a tower faced with pre-formed blacks; there’s also a wall with fin-like concrete posts and random windows whose purpose is difficult to fathom. But the ‘polygonal’ block, with its vile randomness and all the marks of wooden shuttering, is good old brutalism. It’s also extremely ugly. 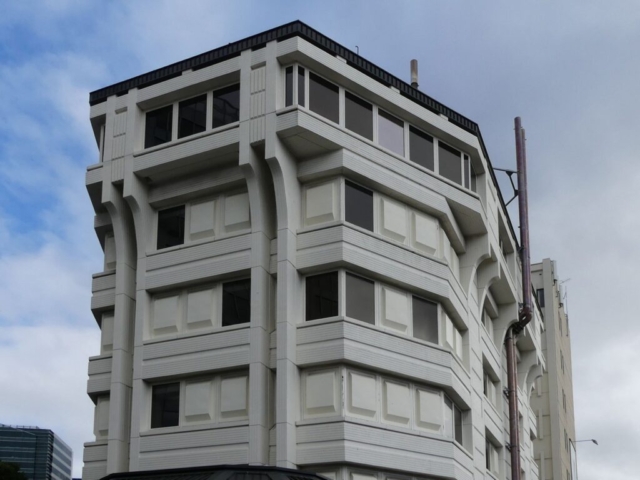 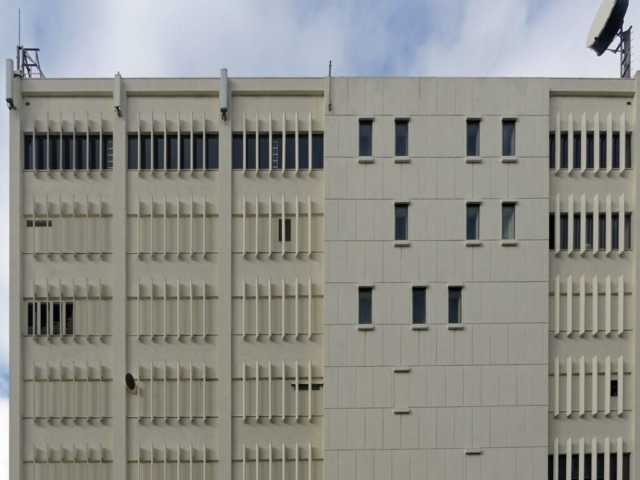 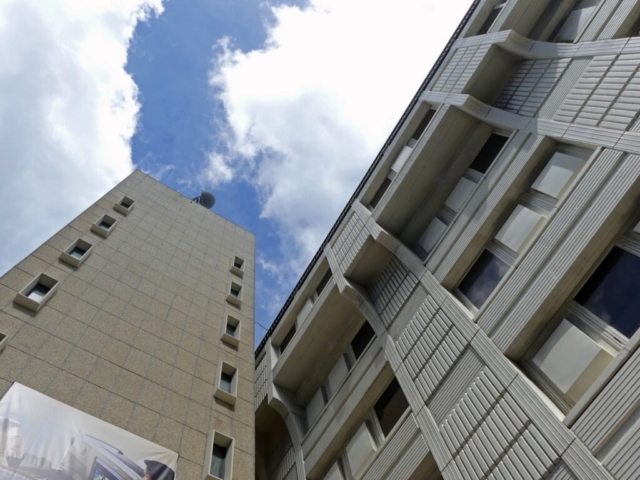 In a rather similar style to the Telephone Exchange, this is just a commercial buildin in the middle of town. Wooden shuttering marks, ugly concrete pillars, rough ridged concrete walls – and a general air of dereliction. Hmm…

Arlington Flats again isn’t entirely brutalist – though some of it is. But it’s certainly an assault on the senses. You drive past and think ‘did I just see a little house in the sky…?’ 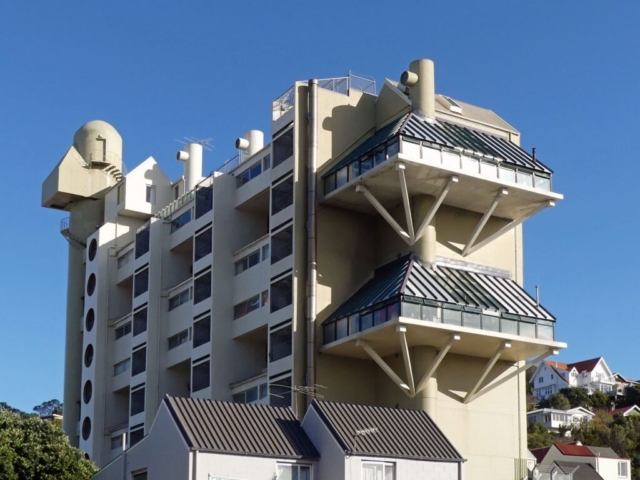 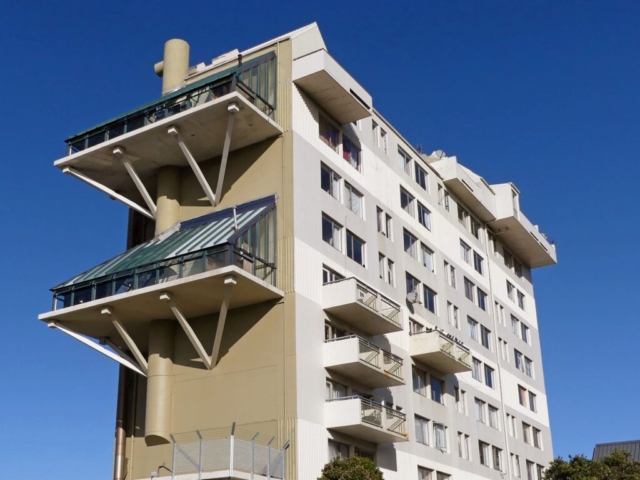 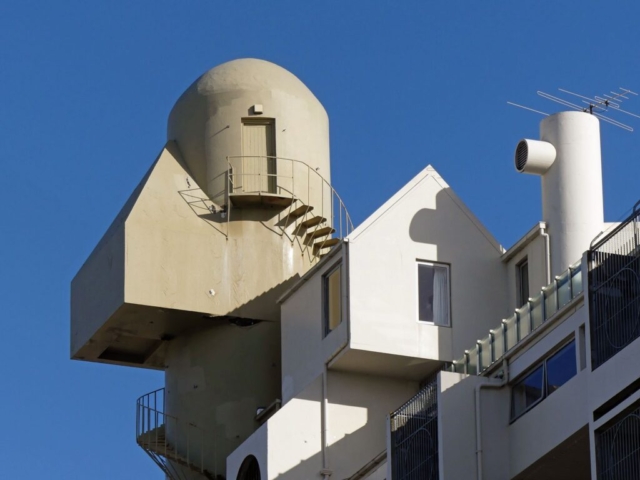 This is another one by the same mad ’round windows’ architect who did Pukehinau Flats. Look carefully and you just can’t believe how bad it is: small sticky-out rooms with 3 external walls that must be bitterly cold, roof gullies that must leak constantly, a horrible sense that it’s all just thrown together, pokey little rooms under the eaves, endless fudges like all those drainpipes and windows just stuck in anywhere. And it doesn’t actually create much housing.

This one is actually quite nice nowadays, after a vast programme of re-configuring and refurbishment. Originally built as one-room apartments with shared facilities for single men (can you imagine…) it’s now been turned into quite pleasant flats for large families. But those huge sloping balconies… reminiscent of some of pretty awful estates in London. No, I’m no convinced.

Karori Teacher Training College is awful enough to get a page of its own, though as I noted there it’s also possible to feel quite fond of it. Not too much is actually brutalism, though there’s a fair bit of concrete; here are some of the ‘most brutalist’ bits. 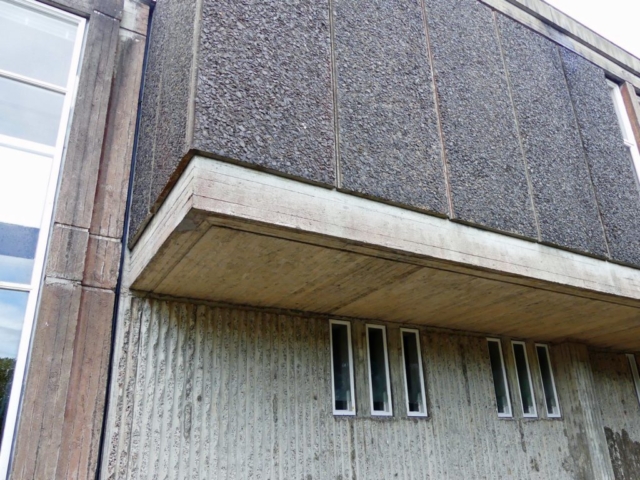 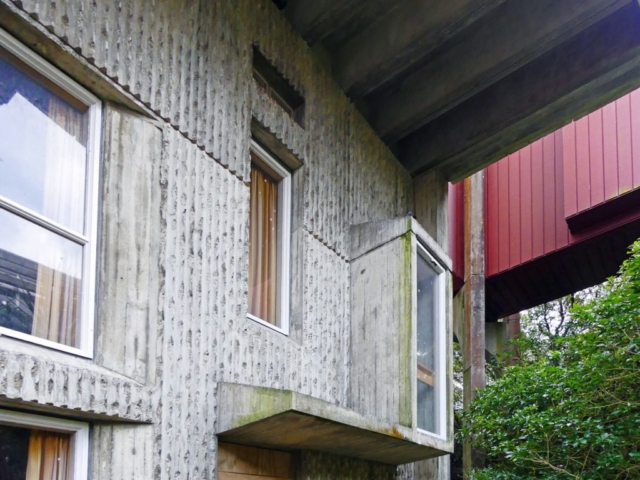 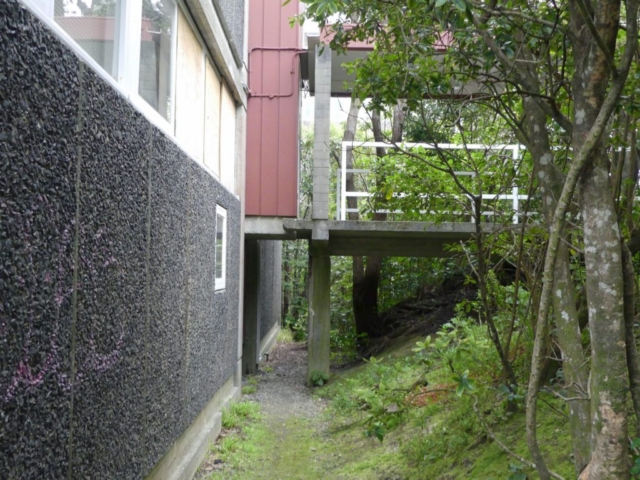 This isn’t brutalist at all; in its way it’s an elegant airy tower, and it was an early aspirational attempt to move away from cramped little wooden houses in central Wellington. What troubles me, though, every time I drive past it, is that it seems hopelessly thin and (perhaps) wobbly for an earthquake city. I expect to see it pancake some day…

Lastly, Wellington Police Station. Perhaps the diagonal struts give extra bracing when there’s an earthquake, but it’s a look that seems to separate the police machine from the general citizenry. 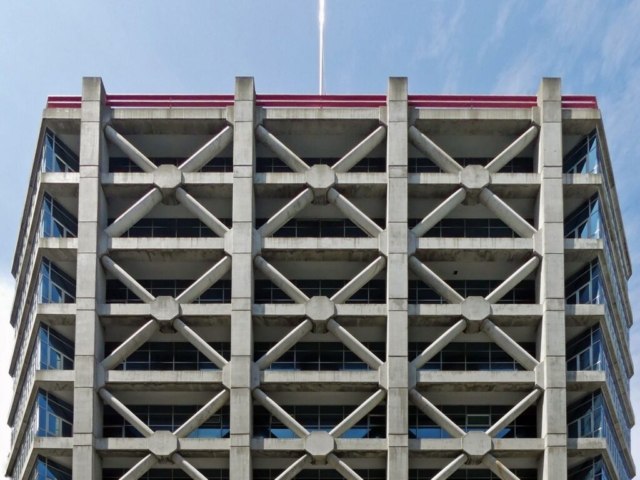