What makes this little modern house in Hampstead interesting? The answer is Erno Goldfinger, one of the most influential, notorious and even hated architects of the 20th century. There’s much more to say on Goldfinger’s later works Balfron and Trellick Towers, but this is the house he built for himself in 1938, where he lived with his Cross-&-Blackwell heiress artist wife Ursula for over 40 years. To occupy the whole complex, I must say, might be rather nice – but in fact they lived only in the centre, the part under the three top central windows. The ends of the property, with two windows each, were separate houses whose sale helped Goldfinger pay for his own.

For a tall man with big ideas, the house doesn’t seem very lavish. On the top level there are three bedrooms and a bathroom; on the split-level middle floor there are a studio for Ursula, a study for Erno, a dining room and a living room. At the bottom are a horrible tiny kitchen, a toilet and two garages. Central to it all is a spiral staircase which not only saves space with some really pokey landings, but also provides a solid central core to stop the building falling down.

All of this is adequate but not lavish: none of the rooms is big, and there are no high ceilings or generous hallways. Most of the rooms are only separated by moving screens (even the kids’ bedrooms open up to make a playroom) and in typical Goldfinger fashion every bit of space is put to use. I reckon it’s a house for a maximum of 2 adults and one child, though they managed to have three. But it’s definitely the sort of house where you could let a party ramble through the whole place, so it earns its keep.

Built in 1938, the house is free of the worst excesses of later 20th century architecture – including Goldfinger’s own – but it’s undoubtedly “of its time”. In good Corbusier fashion it’s basically a concrete box with brick applied only to make it look friendly; and those white window frames and brown brick, which don’t really convey the ‘three houses’ format, are very common in London’s buildings of this time. Inside, there’s all the usual charm of concrete walls, basic wooden doors, sliding screens tiled floors and a generally “nothing-wasted” approach. I can appreciate what it’s getting at – as indeed I can at Balfron Tower – but I think I still prefer my own bourgeois dry-walled, pressed-cardboard fake-stone house, built in 1997 by Robert Hitchins.

It’s hard to find anything more to say about 2 Willow Road, so let’s throw in a couple of the buildings Goldfinger is really famous for: Trellick Tower, and its little brother Balfron Tower. Both of them are very noticable on the London skyline; both are listed buildings; and both cause endless debate and amazement. Go to my page on Balfron Tower for lots more. 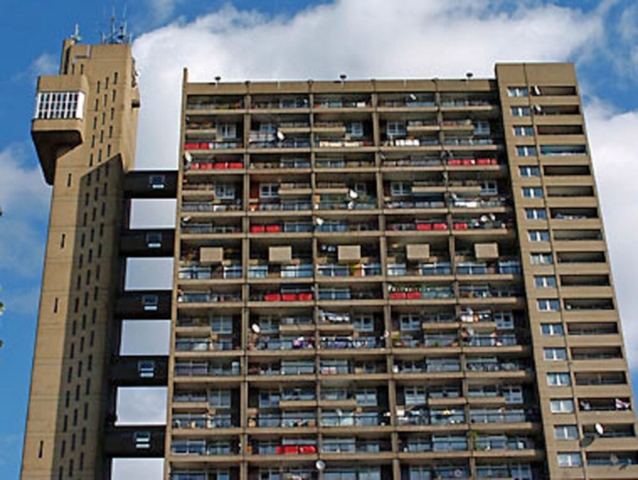 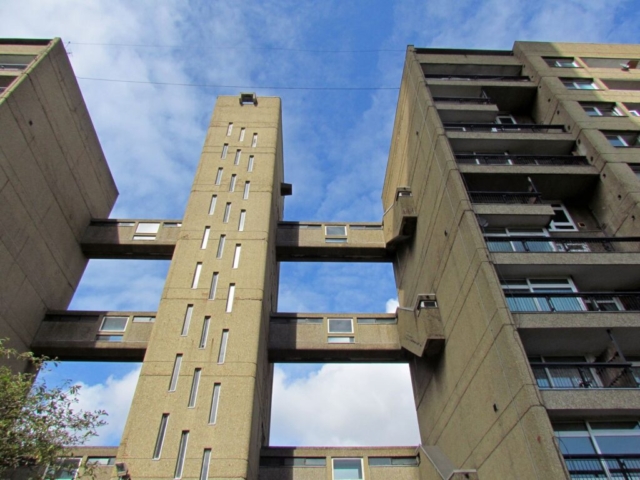