Admiralty Arch lurks rather quietly just off the bottom of Trafalgar Square. Though it may seem incredible, although everyone knows where Nelson’s Column is, many don’t actually know Admiralty Arch. There’s also a confusion with Marble arch and the Wellington Memorial, both of which are entirely different.

Viewed from the other side, looking back up the Mall from Buckingham Palace, it’s also easy to overlook it since from the Palace it looks really tiny. Being basically a dumb-bell shape the internal layout is a nightmare inside, so it’s no surprise that it’s occupied by an obscure part of Government – the Cabinet Office, where I have occasionally worked. But viewed close-up from the outside it’s a wonderful piece of over-the-top Edwardian swagger, standing confidently at the centre of the British Empire and neighbour to the Royal Navy (‘the Admiralty’) who held it all together. Later in the 20th century the world looks rather different, but standing here you can believe Britannia still rules the waves. Not surprisingly, visiting heads of state coming to see Her Madge are often driven through here on their way up the Mall to Buck House.

Written across the top of the Arch, in Latin, is a rather puzzling inscription – at least it’s puzzling if your Latin is as bad as mine. It seems to refer to both King Edward and Queen Victoria, and to be dated 1910 yet have the word Decimo (“ten”) lurking around. But Queen Victoria died in 1901, and Edward was her son…? It turns out to mean “In the tenth year of King Edward VII the citizens renew their thanks for Queen Victoria. 1910”. It’s all very well, but it’s not a message to send the soul soaring.

Here’s a link to the Wikipedia article on Admiralty Arch 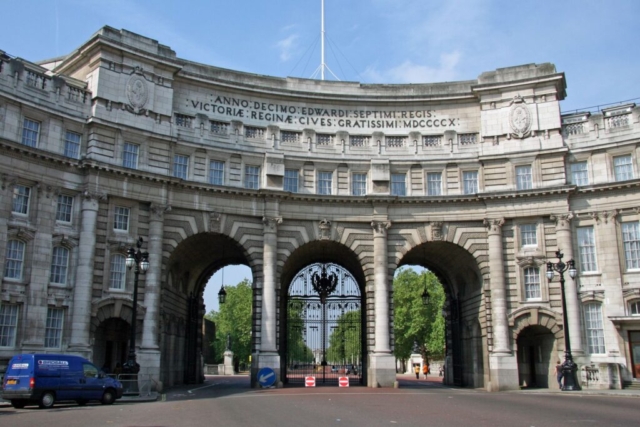 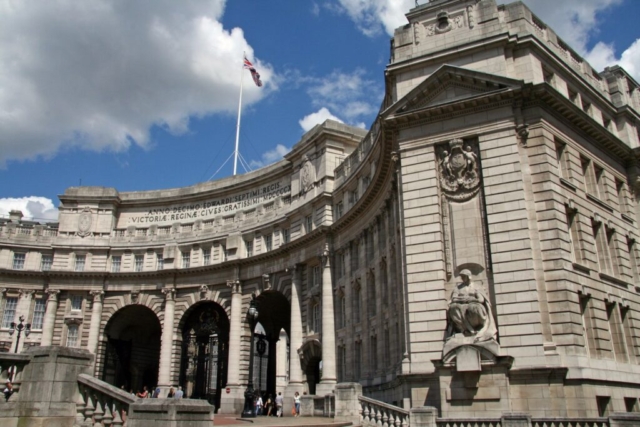