Te Papa Tongarewa (meaning ‘the place of our treasures’) is the Museum of New Zealand. But don’t expect a museum. Events venue might be a better description, or an entertainment centre, a restaurant complex or a place where Wellington Society can show off to itself. Or perhaps an attempt at a first-grade Maori Cultural Facility, on the grounds of restoring a balance in this officially bi-communal country.

Less kind commentators have called it a theme park, a cultural fast-food outlet, and a monument to the short attention span. It does after all have no less than 8 Function Spaces, and you can even hire the Treaty of Waitangi for a cocktail party…

Perhaps all this entertainment isn’t a bad thing. Wellington, after all, produces very little other than government and the Arts, so perhaps it should be allowed to apply some of its talents to the way we understand our history and culture.

But if architecture is part of culture, then Te Papa is a huge disappointment. A fabulous opportunity on the best waterfront in the world, it fails to capitalise at all on the views looking out; and neither does it try very hard to entice you in. There’s no space inside that makes you feel remotely ‘wow’, and it’s full of quirks which fail to deliver anything (e.g. the Wellington Forum window and bits of landings which don’t lead anywhere.) 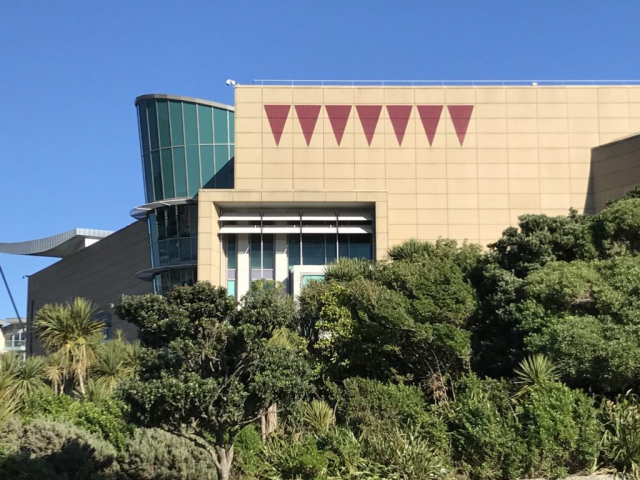 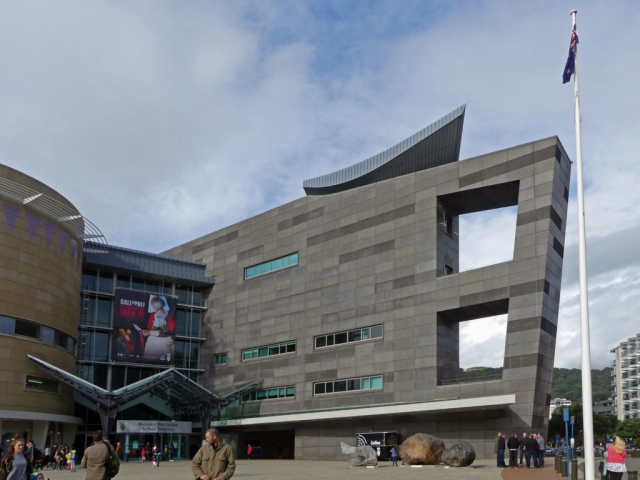 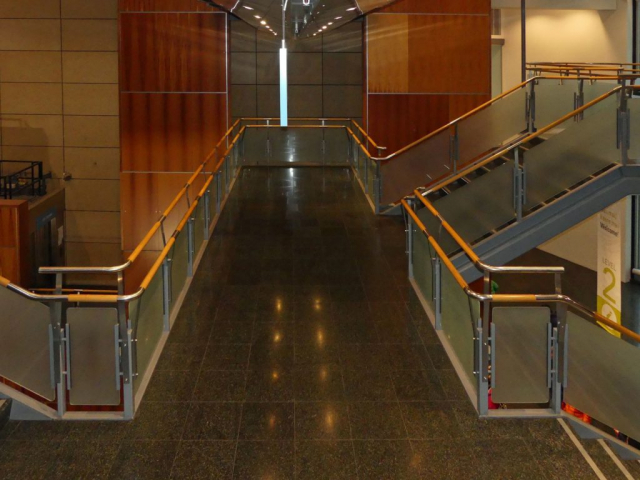 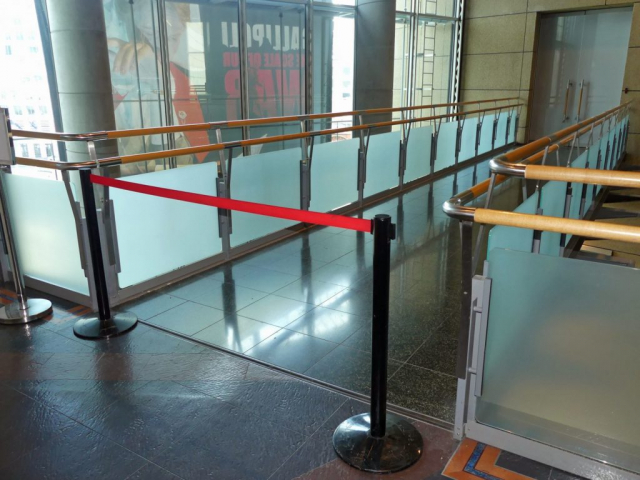 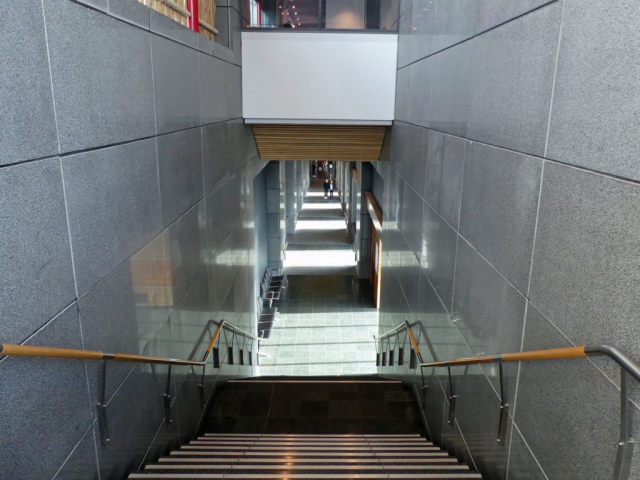 Some of it was designed to house particular Maori ceremonies (e.g. the big ceremonial stairway and ramp between the 2nd and 4th floors), but even if these still happen (a bit doubtful) it means the rest of the year there are acres of space just forlornly unused. And it doesn’t help that many details weren’t got right in the first place (e.g. the many crosswalks and the roof terraces), resulting in some really sad compromises.

I invariably come away from Te Papa feeling empty, though after about 20 visits I’ve collected enough photographs and information to feel affection for some of the stuff that’s there. The website, by contrast, is helpful and educative – particularly when I look something up after seeing it in the building – which suggests the problem really is with the venue rather than the collections.

But if you must go there, here’s my slightly jaundiced guide…

Take the lift up from the entrance to the 4th floor, then wander towards the cafe and take another lift to the 6th floor (they couldn’t make the journey easy…) Duck out onto the roof terrace, but don’t expect to see much of a view or to enjoy even what there is. The original parapets as built were too low, so they’ve installed rather a lot of clutter between you and the view. 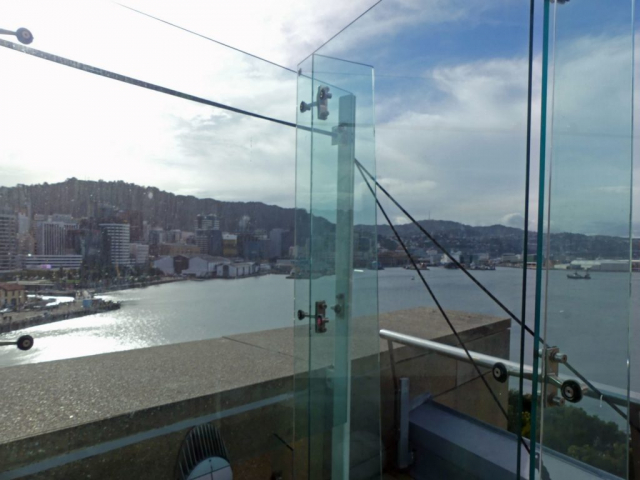 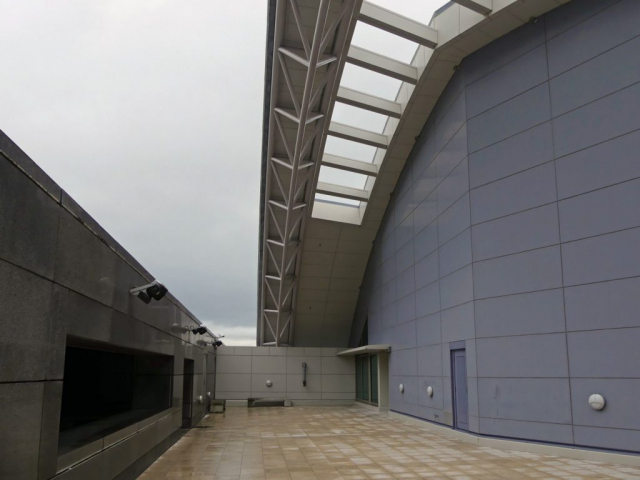 There’s sometimes another exhibition up there as well, but not often.

The 5th floor is home to the National Art Gallery, which now gets a page on it’s own. For a long time the only art on display was this… which told you a lot about Te Papa’s priorities. (And by the way, 2017 turned out to be 2019.) 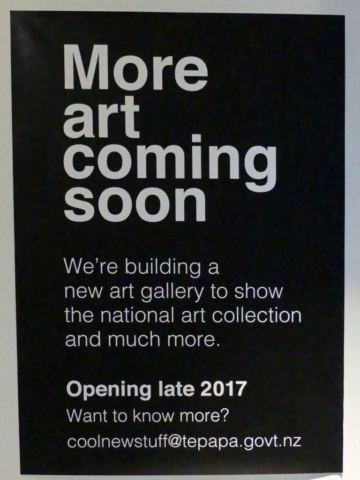 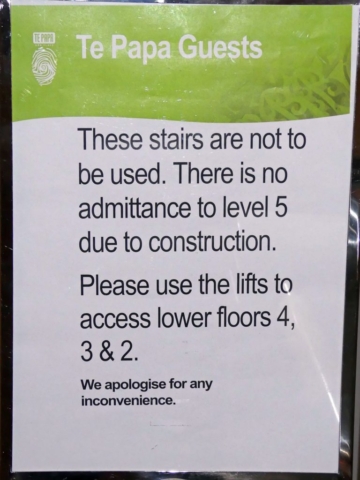 Back on the 4th floor there are a few more bits of the National Art Gallery and then The Mixing Room, an exhibition about recent refugees. This may be very worthy, but it’s largely video, which I can never be bothered with – so instead, head for Passports.

Try not to feel patronised by the idea that this rather small exhibition is the museum’s main offering on ‘all nationalities other than Maori’, or by a few barnacle-encrusted displays from ship-board life: 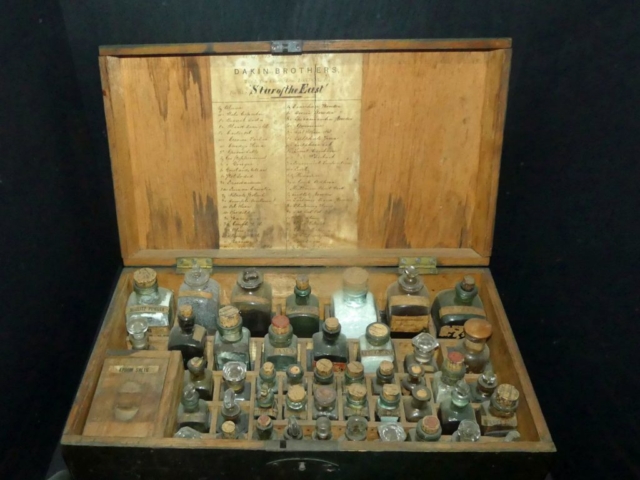 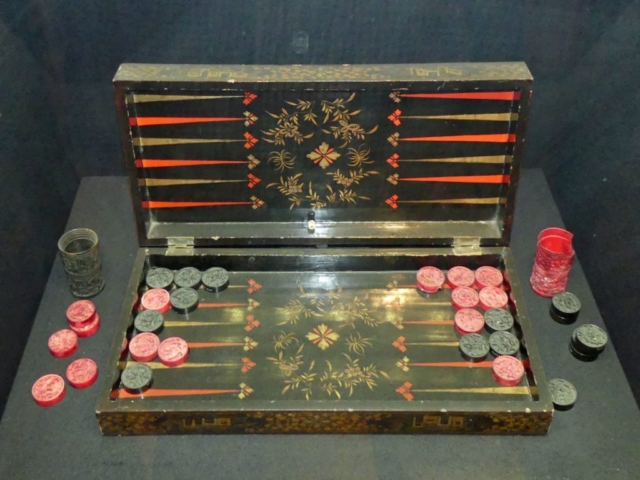 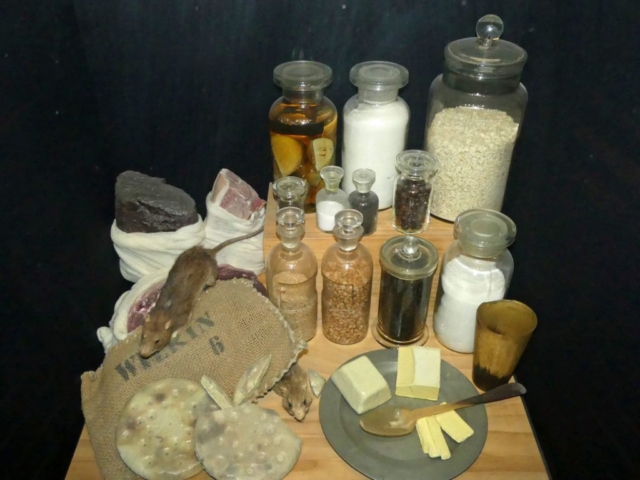 It used to be that you could stop to enjoy two particularly good paintings here and recall that there might be loads more like them in the National Art Collection. At the time of writing this, I’m not sure whether these paintings are still in Passports or have been moved to the 5th floor: if they’ve moved, they’ll be part of that group that have been relegated to high up on a wall and impossible to look at… 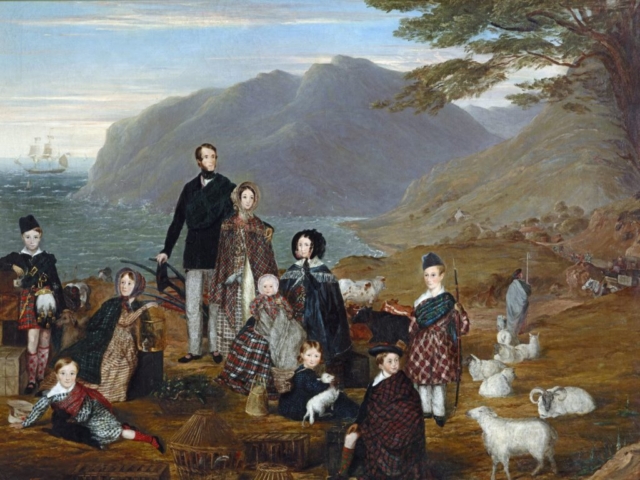 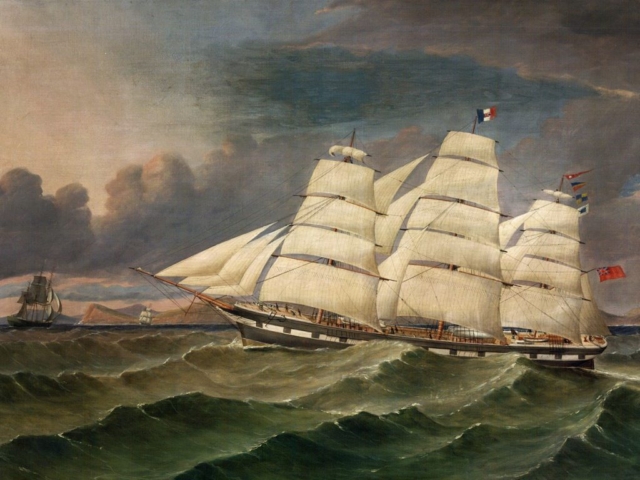 The Te Papa website suggests with a slightly sneering tone that the one on the left (The Emigrants) is a bogus ensemble got up to spin a rather-better-than-true story about a family who are just setting off for New Zealand. (Implication: And isn’t that just typical of the white immigrants.) Personally I find the picture rather charming and I don’t see why if you’re making the perilous journey to New Zealand you shouldn’t try to show yourselves in a good light… but there we go.

Feeling slightly under-nourished by Passports, move on to the larger spaces devoted to Pacific People, the Treaty of Waitangi: Signs of a Nation, and Mana Whenua, which marks the Maori dimension as the indigenous people (ignoring the fact that the Maori themselves were immigrants from about 1450.) Although much larger I’ve never found these exhibits particularly inspiring or easy to digest: it’s just not clear whether we’re meant to invest this stuff with great meaning or simply to think ‘nice craftsmanship’ and move on. How to compare it with the European stuff is a mystery, though perhaps that’s the point – it’s really rather difficult to ‘compare’ cultures. And again the websites seem to make more sense of it all.

The Treaty of Waitangi in particular is one of the core documents defining New Zealand, still very much debated in legal and political circles – but I’ve never found the exhibit in the Museum very enlightening other than to tell me once again the British reneged on it before the ink was even dry. In any case despite the dazzling displays and the generous ‘event’ space the Museum doesn’t actually have the Treaty; it’s kept, sensibly, at the National Library.

What does make people pause is taking their shoes off to stand in the (three) traditional Maori Communal Houses with feelings of some awe and reverence. Sadly photography is banned there so I don’t have anything to show other than one that I took from the Te Papa website (where it’s evidently OK to have a photograph.) It’s quite beautifully constructed, with much of the decoration woven from New Zealand flax:

At the end of the Maori section is … well, is it a Marae (a Meeting Place) with a formal Meeting House, or not? Apparently it is, though the colours are completely unlike the dark-brown/white that you’d see in a usual Meeting House, and it doesn’t seem to embody much of the usual reverence. It’s apparently a ‘Marae for everyone’, though you wonder if anywhere else would simply call this an ‘events space’. Actually rather few events ever seem to happen here, though the website shows the odd conference in progress; but it’s nice to look at, a lot of work has been put into the detail, and there is a stunning coloured window to go with it. 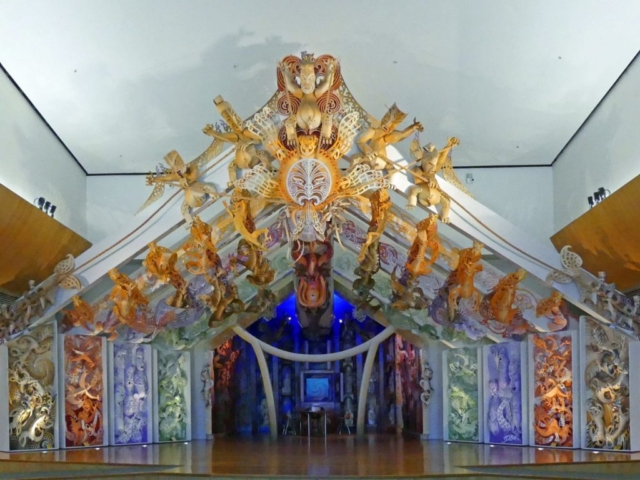 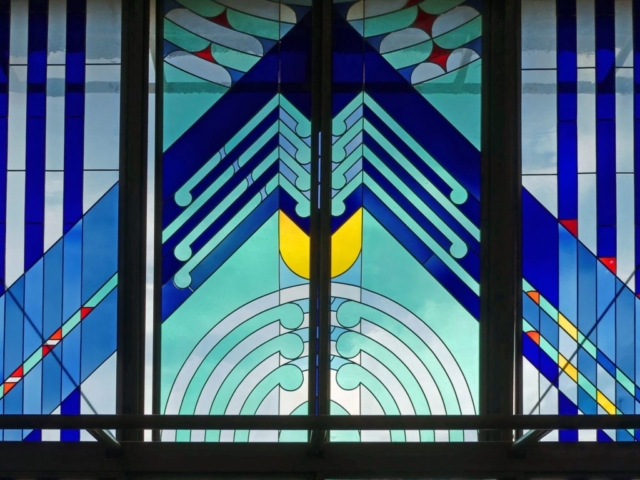 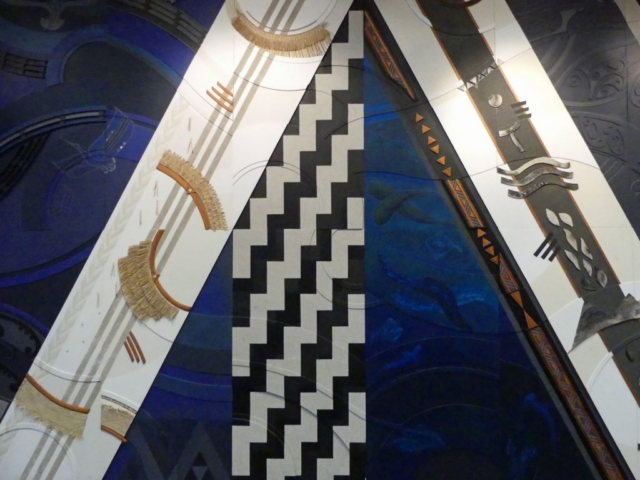 If you want to know more, particularly on the significance of every last detail and the inclusive cultural stance that’s being postulated for us all, click here for Te Papa’s explanation of what it’s all about.

If by now you feel you need some daylight, go out on to the balcony – though again in Te Papa’s bizarre way most of the harbour view is blocked by locked gates and glass screens. More problems with low parapets, it would seem. 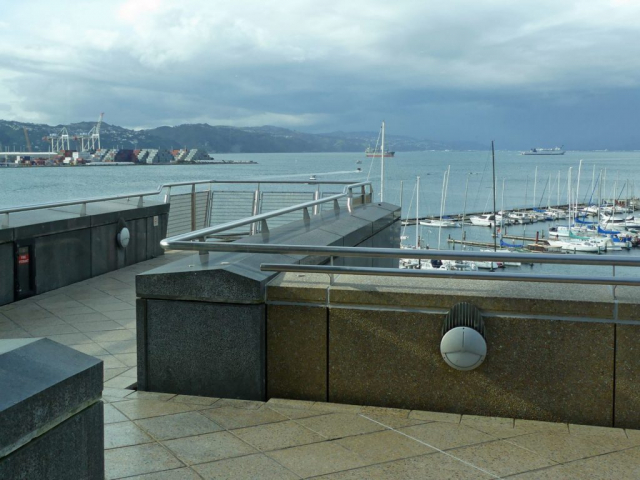 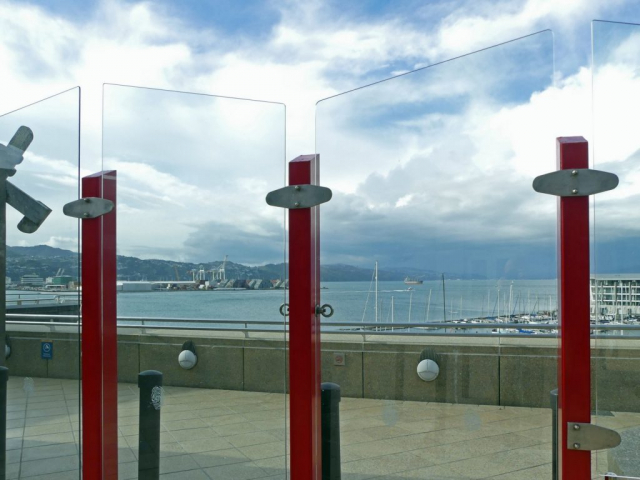 Hurry back in and consider stopping at the cafe, but don’t leave it too late. And wonder why with such a glorious view outside they couldn’t have given the cafe a window… One thing Te Papa does right is to put the ‘treasures’ on the upper floors – it is after all built on reclaimed land on the edge of a harbour where earthquakes and tsunami must be expected. So from the 3rd floor downwards everything counts as ‘interesting’ but not as ‘irreplacable national treasures’.

There isn’t a lot on the 3rd floor, but Blood Earth Fire is worth a look. Very hard to photograph since the exhibits are mainly stuffed animals in glass cabinets, but it does give a picture of the settlement of New Zealand over the last 600 years. Interestingly it admits that Maori culture had already cleared about 50% of the forest before the Europeans arrived, though it rightly castigates the violence with which the incomers set about it once they got going. In an effort to redress the environmental balance, there’s some positive video from modern farmers and land campaigners talking about the importance of keeping and restoring the glorious countryside that’s here. And there’s a bit of quirky culture too, including Footrot Flats and Fred Dagg… a couple of Kiwi favourites. 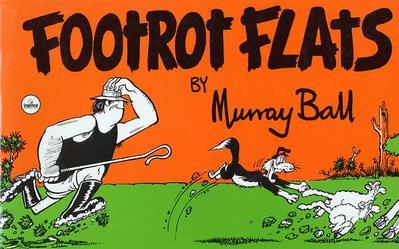 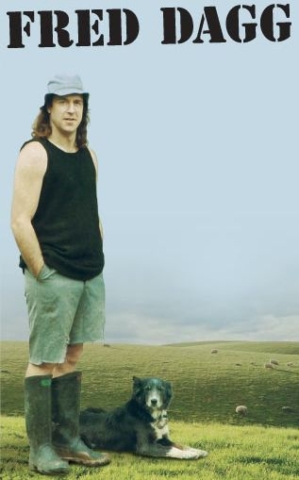 Also on this floor is Rugby Legends: the Spirit of the Black Jersey, a small exhibition of New Zealand rugby history including a couple of silver and gold cups and some tatty old rugby jerseys. Well, if it’s your thing…

Lastly there is the Britten Motorcycle. I don’t get it’s cultural significance but evidently he was a Kiwi hero who – once again – built a better machine than the rest of the world could possibly have imagined.

The 2nd floor is the main attractions area, with three experiences covering earthquakes, wildlife and usually a big audio-visual thing – made all the better with the fabulous local skills of Weta Workshop. The current extravaganza is Gallipoli: the Scale of our War, which is predictably shocking and overwhelming. Not for the faint-hearted, but Te Papa and Wet deserves a ‘well done’ for the way they’ve handled this terrible event in New Zealand and British history.

Awesome Forces deals with earthquakes: it’s a must-do when you live in the Shaky Isles. You can stand in the Edgecombe House as it gets hit by an earthquake, learn about plate tectonics, and generally get earthquaked out.

Mountains to Sea is a standard museum exhibit with stuffed animals and a bit of vegetation, trying to cover the variety of terrain and wildlife that you might encounter in New Zealand. These things never thrill me, but it’s worthy enough. And it does feature – though I’ve never spent much time with – the Colossal Squid, which is indeed colossal.

At this point you can walk down the stairs to the 1st floor, but more interesting is to find the 2nd floor exit to Bush City, cross the little bridge and get yourself slightly lost in a bit of fake New Zealand countryside. Supposedly you can even visit a Glow-worm Cave, though it was closed when I was there. It’s all a bit better than you might imagine, and it’s certainly a pleasant break from the darkness of the museum.

Wander through here for 10 minutes then come back into the museum through the cafe on the 1st floor. The cafe itself is largely self-service and is less ‘up itself’ than the 4th floor one; it can get a bit full of screaming children, but pick your moment and it’s pleasant enough.

We’re nearly done, but you mustn’t miss the one-tonne granite ball which, because it sits on a cushion of moving water, can be turned with just the touch of a finger. There’s almost always a crowd of people enjoying this one… 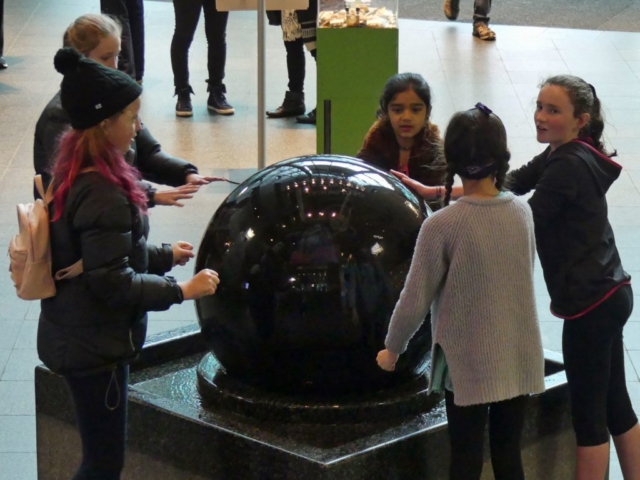 All that’s left in the building itself is the museum shop – which really is rather good – but there’s one last stop to make. Go outside, walk left across the entry plaza and go down some steps under the grey stone outcrop…

Earthquakes? Pah… we’re Kiwis! We invented the Base Isolator – an amazing technology of rubber and lead which we place under every building as a protection against earthquakes. These things can shear sideways up to 30cm (1ft) as well as bouncing up and down, and they’re the clever answer to keeping everything standing the next time the Pacific Plate decides to sneak just a little further under the Australian one.

To put your National Treasures on top of a known earthquake zone, on reclaimed land at the edge of a harbour where you expect a tsunami some day…well, that’s Kiwi spirit for you.